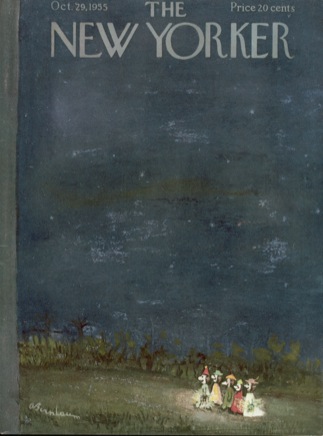 I am encountering a rise in anticipation as the Eve approaches and I find that anticipation can quickly turn to anxious knots as preparations progress.  Still its not without merit as I liken it to the same apprehension I would feel venturing out into the darkness, drawn towards the smoky lights of flickering jack-o-lanterns, the more ambitious smoke and mirrors of yard haunts, even the rather mundane porch light.  In my day (yes, I am that old) we left the house in our made up costumes, lucky enough when Mom took a hand, and with just a group of friends with hands grasping well worn pillowcases, brown paper bags or the (dare to dream) printed plastic shopping bag, with its colorful Halloween images, take ourselves off into the unknown.  This New Yorker Magazine cover by Abe Birnbaum is a wonderful image of a group of friends heading out along well worn or maybe undiscovered paths on that annual candy rite of passage.  Certainly the prospect of free candy had its merits, but I think it was the absence of adult supervision that really appealed to me.  We could go anywhere – talk to anyone – take part in mazes and haunted garages and plans and plots for short-cuts to far off neighborhoods we only really saw from the school bus windows.  It was a no holds barred aberration of rules, instead of being home before the street lights came on we made our way through the darkness to those elusive flickering lights of yards and doorways, instead of making certain we were dressed appropriately for our destination we chose the rattiest or gaudiest draping we could find to deck ourselves out to fit our idea of “witch” or “ghoul” or “Batman” or “princess” and instead of being told we couldn’t have one more piece of candy, we could gorge as we went along, sure in the knowledge of one more street to plunder before the porches went dark.  Sigh.  So despite the hype of candy checking and actual horror of “trunk o treating” I extend my heartfelt appreciation to those of you still doing it the old fashioned way on both sides of the door.  To you Trick or Treaters and Haunters everywhere making the journey and the destination equally worthwhile.