Sometimes it can feel like Halloween is just around the corner, sometimes it can feel like a long walk just begun.  I feel that now as the warm weather beats down and the feeling of a cool breeze is just a memory from a long-ago winter.  Wait.  What is that I see in the distance?  It beckons and guides me.  It flits about in the wilderness.  A lightning bug? Some phosphorescent lichen?  The glowing form of some ancient wood dweller?  Hmm.  I don’t know what it is but I will keep heading towards it.  The light is a wonder, a bedevilment, an enchantment of the senses.  I yearn to be surrounded by such a light and I will gladly endure a hundred eves to get to where it awaits me.  I will wait for you there.

Within, stood a tall old man, clean-shaven save for a long white moustache, and clad in black from head to foot, without a single speck of colour about him anywhere. He held in his hand an antique silver lamp, in which the flame burned without chimney or globe of any kind, throwing long, quivering shadows as it flickered in the draught of the open door.
The old man motioned me in with his right hand with a courtly gesture, saying in excellent English, but with a strange intonation: ‘Welcome to my house! Enter freely and of your own will!’ He made no motion of stepping to meet me, but stood like a statue, as though his gesture of welcome had fixed him into stone. The instant, however, that I had stepped over the threshold, he moved impulsively forward, and holding out his hand grasped mine with a strength which made me wince, an effect which was not lessened by the fact that it seemed as cold as ice – more like the hand of a dead than a living man…

…I went back to the room, and found Van Helsing looking at poor Lucy, and his face was sterner than ever. Some change had come over her body. Death had given back part of her beauty, for her brow and cheeks had recovered some of their flowing lines; even the lips had lost their deadly pallor. It was as if the blood, no longer needed for the working of the heart, had gone to make the harshness of death as little rude as might be.
We thought her dying whilst she slept
And sleeping when she died.
I stood beside Van Helsing, and said: ‘Ah, well, poor girl, there is peace for her at last. It is the end!’
He turned to me, and said with grave solemnity: ‘Not so! alas! not so. It is only the beginning!’
When I asked him what he meant, he only shook his head and answered: ‘We can do nothing as yet. Wait and see.’ 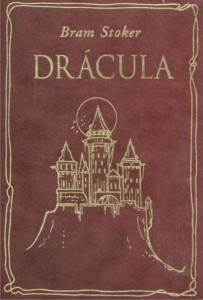